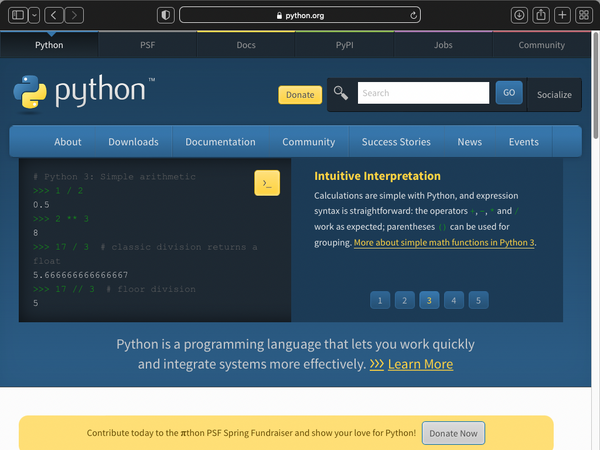 Get your computer set up for Python in under an Hour

Follow these steps to get your computer ready for Python development in a safe and secure manner.

I'm scared download this. I thought as I stared at the Python.Org websites download page on my old crusty Compaq laptop--that was an academic gift for college. I was afraid I was going to break it and it was my only access to a computer. So I spent hours searching around online and reading forums for to see if downloading Python was safe.

If that sounds like you then this keep reading.

The safest way to download python is from the official download page which provides several builds for the three most popular Operating Systems; Windows, MacOS, and Linux.

So go ahead and press that download button and rest assured that your computer isn't going to get bricked.

If you're still not convinced then double check the URL in the bar and it should read https://python.org – it is the https that is important because it means that your connection to the site is secure and it will not serve you any malicious code, for the most part.

Let me be clear that https does not guarantee a site is legit just that the connection to server is.

Next up is a text editor and right now Visual Studio Code go to. A text editor is like Microsoft word or Google Docs for programming, similarly they come with built in syntax checkers and auto correct for programming languages– helpful for both beginners and pros alike.

It is the tradition for all to create a program that outputs "Hello, world" to the terminal. The terminal is the purest way to interact with a computer and is often how it is shown in the movies whenever the l33t h@ck3rs break into things. It is disorienting to use at first because it is just a black screen.

First, click the visual studio icon which will launch the program.

Next, click on extensions and install Python, this is to help you write Python code that conforms to the standards, and helps to prevent syntax errors.

3.a Writing the code

In you're newly created file type out the following:

3.b Running the code

Next, inside of Visual Studio Code click Terminal and it will open a window at the bottom of your code editor and type the following:

and your terminal will show

What the f*ck just happened?

Congratulations on making it this far. Do a little celebration dance. Have a coffee or your preferred drink. At a minimum have a snack and take a break.

The first time I did the above I felt triumphant and exhausted. My brain was running on fumes and I closed my computer for the day. To this day while at work I still feel that triumph when the code does what it is intended to, but don't feel as tired (thanks to coffee and sugary sweets).

Now, that you've rewarded yourself and are feeling a little relieved let's get into it (yuh) of the how and why of computer programming.

Python, is a program that we downloaded from the internet, specifically Python.orgs servers (a server is another name for a computer).

That's right you spoke computernese with the aid of Python and that's essentially what programmers spend their days doing albeit with different languages and with different goals.

The reason they do so is to automate repetitive tasks that other humans do. An example of this is FreeResumeScanner.com which takes in a resume and a job description that you're applying for to offer concrete feedback that a resume professional would offer.

The big idea here is that code unlike a human can do two things really well; work 24 hours a day and  process more forms than a human could do by themselves.

For example, FreeResumeScanner.com can handle thousands of submissions per hour, whereas I as a resume professional can only process maybe one or two resumes per hour.

Another much more complex example is to think of Netflix or Twitter, imagine if each time you wanted to watch a movie you had to wait on a person to physically get the disk that contained the movie and then had to wait days for it to arrive to you via mail. Or if you had to mail in a letter to Twitter and wait for it to be approve and then posted onto their website. Thanks to computers and computer programs– we as users do not have to wait.

if you're wondering what the next steps are now that you have a computer set up that can be used to create software the next step is to learn Python beyond the print() function from the standard library to build more complex programs that can perform useful operations on data.

Join a growing community of more than 130,000 friendly readers. Every Sunday I share actionable productivity tips, practical life advice, and high-quality insights from across the web, directly to your inbox.